One of the simplest developments a developer can do is a straightforward subdivision, or splitter. These can often be quick, relatively easy compared with other forms of development and rather inexpensive. This won’t always be the case of course, so you really do need to make sure you know what you are looking at and what you are in for. Let’s take a look at two examples, one that is a simple splitter, the other dollar draining!

In both examples we’ll start off with two very similar sites. Let’s make them each the same size in area and both are corner blocks. Both are located in the same suburb, in fact just one street away from each other. From a planning perspective, both sites can end up being subdivided or split into two. Because it is a corner site we are going to create two square lots, one will remain a corner site and the other will have frontage to the side street. The end value of each will also end up being the same.

This site has a small 3 bedroom house located to the front of the block and it has a slope to the side street. It also already consists of two lots, though not in the alignment that we want. There is a sewer and water supply located in both streets and because of the slope you can get storm water to the curb in the street.

Here is a plan of the site. 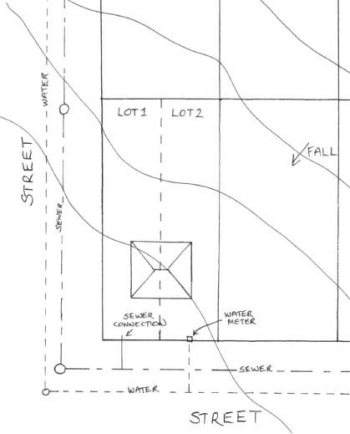 Overall this is pretty simple. The services are where they need to be, the house is located so that you can keep it where it is and still create a vacant lot beside it and it is already two lots. Unfortunately they aren’t where we want them, but there is a significant cost advantage because the application is for a Realignment of the Boundary, Reconfiguration of 2 lots into 2. So while the lot shapes change, you aren’t actually creating any new lots. This means you won’t have to pay any infrastructure charges (also known as headworks charges). Infrastructure charges are payable whenever you create any additional lots or units.

Here is a plan of what you are proposing, including the proposed sewer and water connections. 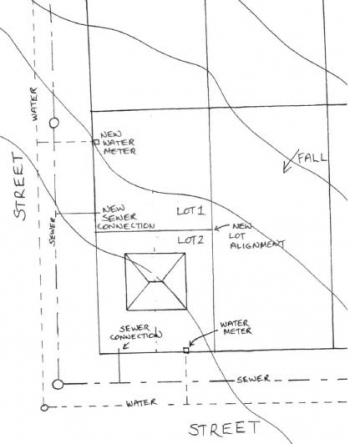 Now let’s take a look at the numbers.

Here is a plan of the site. 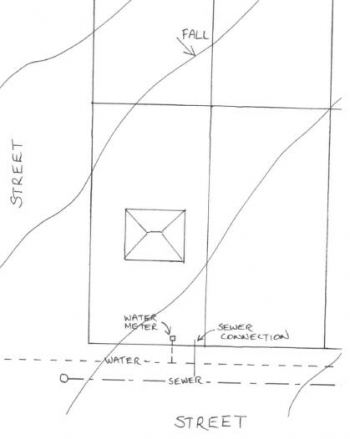 From a planning perspective this site can be subdivided to look just like the first example. But it is nowhere near as simple, or as cost effective. Firstly the house needs to be either removed or shifted to allow room for the new vacant lot. There is no sewer or water supply line in the side street to service the new lot. This doesn’t matter too much for the new vacant lot – it slopes away from that street so you couldn’t drain to the sewer even if it was there. Instead you will need to extend the existing sewer from the front street through the front lot to service the new back lot. The water is a bit of a problem though. You also need to extend this, but not through your property but rather up the side street. That is a lot of road to dig up! Lastly, the site consists of only 1 lot, so any proposal requires an application for Reconfiguration 1 lot into 2. Therefore infrastructure charges are payable and these aren’t cheap!

Here is the proposed finished product. 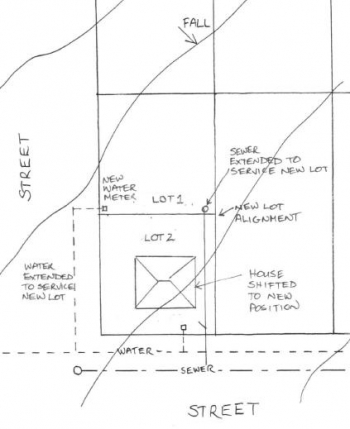 Now let’s look at the numbers. Vastly different to the first example!

As you can see, the equity gain in the second example isn't brilliant. Keep in mind if you sell you also have selling costs and potentially GST to pay. Ouch! Also, in neither example have we allowed a contingency factor or holding costs. The contingency can be kept quite low in example one, but there are a lot more things that can go wrong and a lot more costs involved in example two, equating to a larger contingency requirement. Example two will also take longer and have greater holding costs.

This is an excellent example of how novice developers can get it wrong. On the surface, both properties are much the same. In fact, if you did only the usual searches and inspections that an everyday home buyer does, the only real difference you will probably notice is the house position. You may not pick up on the fact that one site is actually made up of two lots. You also won't know the pipe locations or the consequences of the slope. You miss just one of these items and it can turn the whole project around. Miss all of them and you'll lose!

The interesting thing to note is both of these properties would probably have the same ad... "excellent subdivision (subject to council approval) opportunity with a renovator house to boot!".

The number of times we see properties that don't work, or get advertised with false information on what can be developed is alarming. The scary thing is these properties still sell! We don't want you to be one of those buyers. Employ the right people and more importantly get yourself educated.

The Developing for Profit workshop is being held very soon and features 12 guest speakers over two full days. The event is essential for any existing or would be developer. Ask yourself after reading the above article whether you could have missed one of the critical differences between example one and example two. You may not have missed all of them, but just one could cost you tens of thousands of dollars. This is why you should get yourself in the know. Visit www.developingforprofit.com.au for more information.