Some of you may have seen an article in the Courier Mail on the 22nd May 2006, which discussed the rehabilitation of some of Brisbane's oldest and better known suburbs. 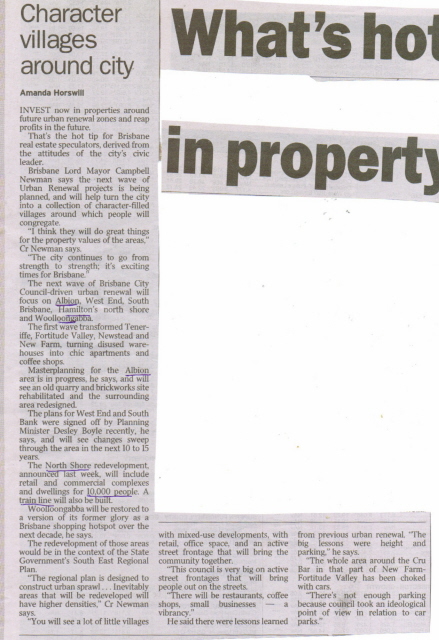 The article touted Woolloongabba, Albion and the Hamilton North Shore Precinct as future potential property hot spots, the reasoning being that they are undergoing, or about to undergo dramatic changes as part of Urban Renewal projects.

A previous article I wrote was about the West End Peninsualr and the attention it is receiving as a partial consequence of involvement by the Urban Renewal Taskforce.

This article is going to further the points raised in the Courier Mail article and essentially add some more reasoning to the claims of these areas being 'property hot spots'.

Woolloongabba has long been a neglected suburb. In fact there has been very little activity ever since the South East Freeway split the suburb in two.

This is changing. The new Gabba Central (the infamous 'hole-in-the-ground' fronting Ipswich Road) finally looks like it is progressing. The South East Queensland Regional Plan and various council documents have earmarked the Go Print Site, beside the Lands Centre between the Freeway, Stanley Street, Vulture Street and Main Street as a future Transit Orientated Development (TOD) site and there is an area framed by Stanley Street, Ipswich Road the Freeway and Hawthorne Street that also has potential as an extension of the TOD site.

I was involved in a development application in the latter precinct, not far from the new and very popular Chalk Hotel, that was refused, but not before giving Council notice that this area has the potential for greater density. In fact, not only did a report commissioned by the applicant support the up-zoning, so too did a report commissioned by council. In the end it was the then unkown North South Bypass Tunnel that complicated things beyond what was acceptable at the time. 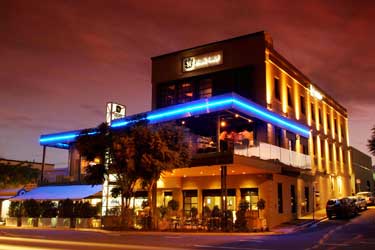 In time, Woolloongabba will become the bustling suburb it once was. It may be difficult to comprehend now, but imagine Logan Road at the 'five ways' being compared to Melbourne's Lygon Street. A little easier to imagine, but it has taken decades to come is shopping options, which will be located in the Gabba Central development and likely along Stanley Street. Imagine people, as 6-10 storey mixed use buildings are constructed around the existing busway and a future train station.

Now here I have just discussed Woolloongabba, mainly because its an area I have been watching for a long time, but do not think they same cannot happen in Albion and along the Hamilton North Shore, two other places that will undergo serious change. Imagine the difference to the Hamilton North Shore with the implimentation of an International Standard Cruise Ship terminal, a new train station and all the shops, cafes and residents that come with them. 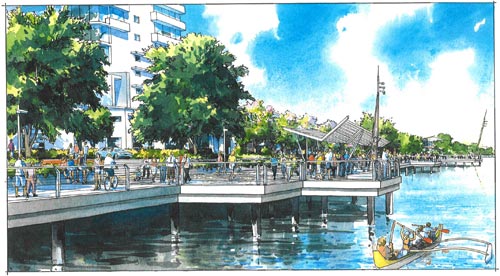 An artist's impression of the future Portside Wharf Precinct at Hamilton North Shore.

Similarly with Albion, which has the existing elelments in shops, character and a train stations, but with a new Masterplan and the redevelopment of the old flour factory, things can only go from good to great.

Woolloongabba, Hamilton North Shore and Albion are definetely places to watch... or to make sure you do not miss out, buy in!