This recently completed development by our clients Sonia and Glen was a fantastic success, with over $700,000 or 32% equity gain being achieved – a brilliant result in the current market from a 5 townhouse development. How they have achieved this isn’t simply the result of getting one thing right, but a combination of buying well, knowing the rules (and more importantly what rules could be broken!), good design and a fantastic valuation at the end. There are many lessons in this for both beginner and experienced investors. 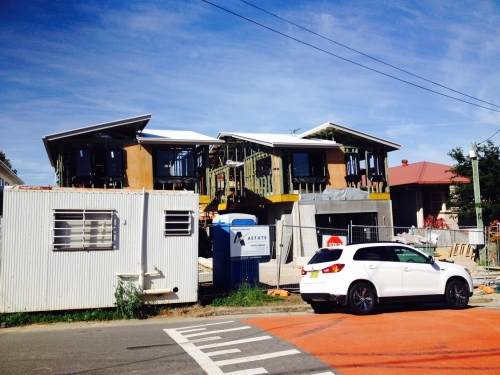 At completion of framing stage

Both Investigate Property and The Reno Kings live by the motto ‘you make your money when you buy’. If you pay too much, or buy the wrong property it can be very difficult to make a development work, let alone any other type of investment. What is interesting in this instance is the vendor was on-selling a recent purchase, so recent in fact that they hadn’t even settled yet! They had bought directly from the seller at a very good price and wanted to make a quick buck. Sometimes it can be difficult to convince yourself that you are buying well when it is clear they bought even better, but no matter what the history is, you need to let the numbers do the talking, and our numbers were telling us this was a good buy.

The site was located in a quiet street approximately 7km from the CBD. It held numerous advantages and a couple of negatives, and this is where having quality consultants working with you, and an understanding of the development rules really come into play. The site had a sewer manhole on it, so this needed to be considered in our design. A bigger question mark was the 6m long traffic calming device (fancy word for big speed bump) in the middle of the site's frontage. We required advice on this, as removing or shifting it was either out of the question or too expensive, but luckily we had a traffic engineer involved with experience in this field. The site was zoned for two storey units and townhouses and was 830m2 approximately, which for anyone who knows Brisbane property would also know this is an unusual size. Typically you’ll find sites that are 809m2, but this particular site had a extra metre of depth. Could this yield more townhouses? On it’s own, no. However, the site also backed onto a sport and recreation use which could allow a reduction in rear setback, as any development isn’t going to be overlooking or affecting neighbouring residential property. Would this in combination with the 1m of extra depth allow us to get 5 townhouses on the site? Yes! A wonderful combination that turned 4 townhouses into 5, yet we were paying similar money to a typical 809m2 site in the area. 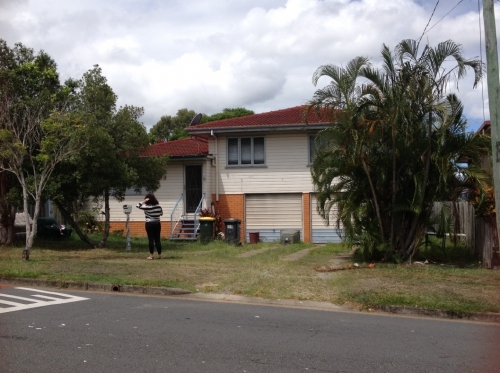 The house when purchased, including the offending speed bump to the left

The research about the site and what we could manage was conducted during a conditional period, as was a finance application. This was our next big hurdle... the first valuation came in at $500,000, just a mere $205,000 short of the contract price! We were onto a good broker that was able to secure a second valuation, this time at $520,000. Oh dear! Could we be paying too much? If you listened to the valuers, yes, however, they were extremely focused on the dwelling on the site and not the potential of the land underneath. The house on the site was, to put it bluntly, ordinary, but we were knocking it down in a few months. Both valuers went looking for comparable houses, so compared our site with sub-standard dwellings and either on land that was far smaller (500m2 approx) or that were zoned Low Density and could not be developed. They weren’t comparing apples with apples. Further, the first valuer inserted a statement into their valuation that read “we understand this site is being purchased off-market for $705,000. It is our opinion that should the property be openly marketed today, it would achieve a sale price of $500,000”. As a buyer’s agent of development sites I can tell you it had been at least 6 months since I had been able to purchase a site with the same zoning at just $850/m2 of land, let alone one that had advantages that would allow more to be developed on the site than usually expected. Luckily, we were still working with the good broker and a third valuation (and now a new lender) was sought, with the valuation now coming in at contract price. How? He compared with similar land sizes and similarly zoned property, or put another way, apples with apples! That is a massive 41% difference between the lowest and highest valuation. Is it any wonder valuers cop a bad wrap in the development industry?

Sonia and Glen sought the services of an architect who designs a lot of townhouses in Brisbane. This was a wise move, as he knew exactly where the rules could be pushed and what needed to be done in order to achieve 5 townhouses. Not only that, but the final design had three out of the five townhouses as four bedders. A brilliant outcome 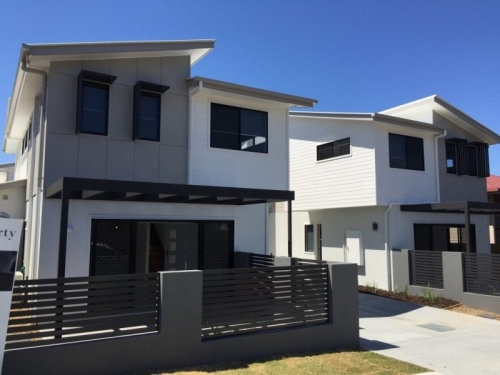 The project was completed in late 2015 and the very exciting result was Sonia and Glen managed over $700k or 32% in equity gain from this project. That is a brilliant result given this size of project is very difficult to source and many developers are closer to the 20% mark. Obviously a number of items contributed to this. We’ve already mentioned buying well and a great design, but one final piece to the puzzle was a brilliant valuation on completion. As Sonia and Glen were holding and not selling, they refinanced on completion which involved a favourable bank valuation (something that is a bit of an oddity these days!). On average each townhouse was valued at $584,000. Granted three out of the four are oversized, but with most new townhouses selling for sub $550,000 nearby, this was a great outcome. 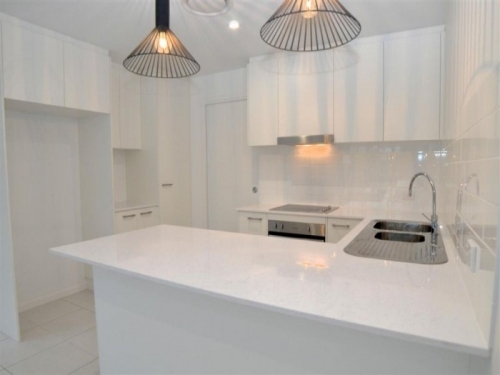 Sonia and Glen and managed a fabulous result, the combination of a number of things, but in summary they have bought the right site at the right price, employed the right team around them, persevered (many would have walked away after one bad valuation, let alone two) and went for it!

Investigate Property are buyer's agents of investment property and in particular development sites. We have a thorough understanding of the planning rules (and what rules can be broken), what can be achieved out of a site and where complications can arise. To have us on your team click here.