Value Add by Adding a Bedroom

One of the easiest ways to quickly add value to a property is by finding an extra bedroom under the existing roofline. Most graduates of the Reno Kings would know this already, but there is no harm in emphasising the point and to also show how easy it can be.

There are a few key basics here. Remember, the point of adding an extra bedroom is to increase the value or increase the rent. If the exercise does neither, then don’t do it. So with that in mind, there are some scenarios where it does not work. For example, there is a much higher demand for a 3 bedroom house over a two bedroom house, but there is less demand for 4 bedrooms than there are for 3 bedrooms. Also consider the end user. Are they are family? If this is the case they may value the 4 bedrooms, but they may also require a second bathroom. Adding a 4th or even 5th bedroom often becomes less important than adding that all important second bathroom.

There are some key areas where you look for and find that extra bedroom. Some of the more common ones are to convert the formal dining room to a bedroom. This is an option providing you still have somewhere to sit and eat dinner, whether it be a dining table in the lounge room, a breakfast bar, a deck with cafe blinds (for the colder days!) or an eat in kitchen. Another option is to change the location of the entry into the house. Quite often the entry goes into a room, which then leads to another room. While the entry stays where it is you can never split the rooms as you will always need to walk through one to get to the other. Another option might be to shift the kitchen. In some older houses the kitchen is in its own room, something not so desirable in this ‘open plan day and age’. This exercise is fairly easy if you have a raised house and access to plumbing under and won’t cost you an arm and a leg if you were planning on replacing the kitchen anyway. The kitchen can now be located in the lounge, providing it is big enough. Clever use of space and improvements in kitchen design allows this flexibility where it once was not an option.

Sometimes finding an extra room is even easier than this. Take a look at the existing layout and furniture arrangements. It could be that all the walls and rooms are there... they just need a different label! We have increased value significantly before by converting a study to a bedroom... all it took was a new label on the plan! Why was it only a 2 bed plus study to begin with? Because that’s how the current occupants were using it so that is how the agent advertised it!

Another one we have done was advertised as a 2 bedder, and yet this place was huge! The problem was every room had 2 entries and exits, so the agent didn’t know what to call them. We screwed 3 doors shut... no longer did these rooms have 2 entries and exits... and guess what?! It is now a 4 bedroom, 3 study student house earning fantastic income! 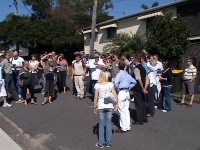 Join Justin Eslick and the Reno Kings on Sunday 17th October for the RDC Mobile Wokshop. Hurry, as there are only 40 places available.

The photos below are of a property recently purchased, renovated and subdivided by an Investigate Property client. They purchased a 2 bedroom house which had an 'entry room' which was setup as a kind of library come study come place to leave your shoes, as well as a formal dining room and a large lounge room. So the house had plenty of space. The problem was to gain access to the house you needed to walk through the library/study to get to the dining room to then access the rest of the house. Our client shifted the entry and filled in the wall between the library/study and dining room and hey presto! He now has a 3 bedroom house, still with a separate dining and lounge room! Furthermore, if you went and looked at the property today you would never in a million years pick that the entry wasn't always where it is now. Check out the photos below to see how easy it was.

Before - This shot was taken in the dining room looking back towards the Library/Study/Entry. Note the open front door on the right hand side. 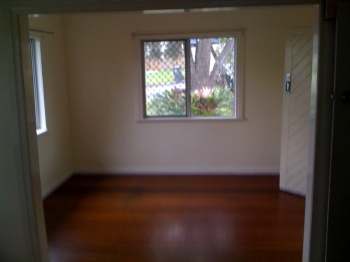 During - Filling in the wall between the dining room and what will be a new bedroom. Easy as 2 studs, a couple of noggins, a new door, relocation of the light switch and some plastering! 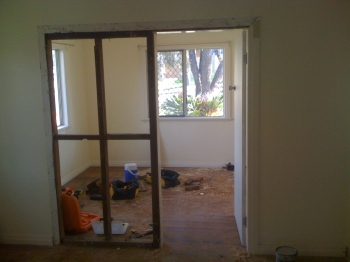 During - New front door. This shot was taken from within the lounge room. That opening the builder is working on is the new entry... it was never there previously. Behind him is the old entry which will soon be filled in. Plenty of 'cannibalisation' happening here too with the old front door being relocated and some of the existing chamferboards being reused. 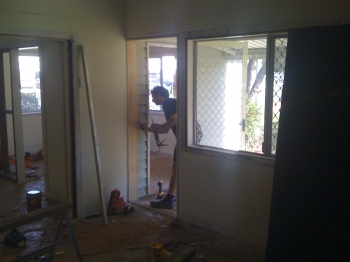 During - This shot is taken from within the new bedroom. You can see the old entry yet to be filled in, the security door shifted and now attached to the new entry and the new bedroom door on the right hand side. 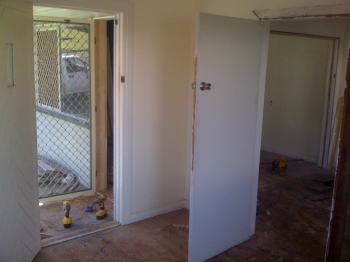 After - This is taken from within the dining room and shows the now finished filled in wall and new bedroom door. Easy! 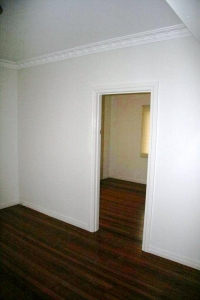 After - The new entry! 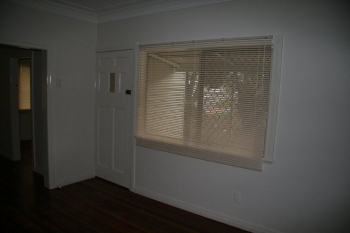 The total cost of this exercise was just over $3k. That is great value when you consider it will result in about $2600 more rent per year and the value of a three bedroom house comapred with a two bedroom house is about $60k more. That equates to $20 made for every $1 dollar spent... and it is paid for itself in just over a year!

Join Justin Eslick and the Reno Kings on Sunday 17th October for the RDC Mobile Wokshop. Hurry, as there are only 40 places available.