Risk Versus Reward: Careful what you listen to

One Brisbane suburb that has been suggested as good opportunity for investment buyers of houses at the moment is Rocklea. This month's Australian Property Investor Magazine (October 2011) has Rocklea as the sole Queensland representative for where to buy houses within their list of 40 metro suburbs that are hot and under $400,000. This article was also picked up by TV, so it got a lot of air time. On paper it sounds good... 15% average growth per year for the last 10 years. However, there is a catch and it is a big one, and as such it would be a rare thing for us to recommend any of our clients buy into Rocklea.

Rocklea is well known as a suburb with flood issues and there is no hiding this fact. But even flood affected suburbs have capital growth as is the evidence from the last decade. People who purchased there 10 years ago have done well. Trouble is they can have massive losses too. The statistics in the back of the same issue of API has Rocklea with an average of 13.8% growth per annum over the last 10 years, slightly below the stated 15%. But what is most disturbing is it has had a 19.7% loss in the 12 months to June 2011. This is the highest drop of any suburb within the Brisbane City Council area. You can attribute that directly to the January floods. You wouldn't be too fond of Rocklea as a suburb if you purchased there in 2010. In fact, the median price of a house in Rocklea in December 2007 was $321,000 (API Magazine April 2008), $16,000 more than in June 2011 (API Magazine October 2011).

So what's the wash up?

Rocklea is now very affordable and some cheap properties can be found there, but we can't go so far as to say they are bargains. Imagine if you purchased one and there was another flood this summer? How do you think your growth will go then? If there is no flood this summer or any in the short to medium term then yes, it is likely you will have exceptional growth because the suburb is starting from a low base point thanks to January's floods.

Another thing to remember is Brisbane was in a drought for many years leading right up to January's floods. Rocklea as a consequence would not have experienced the same level or frequency of inundation as it may have in the past, meaning the last 10 years Rocklea would not have had any major slump in prices as the result of flooding.

The article in question suggests investors should do their research, especially in light of recent floods. We take this to mean investors should avoid buying flood prone property. This might be hard to do given only about 4 streets in all of Rocklea doesn't flood! See below plan. 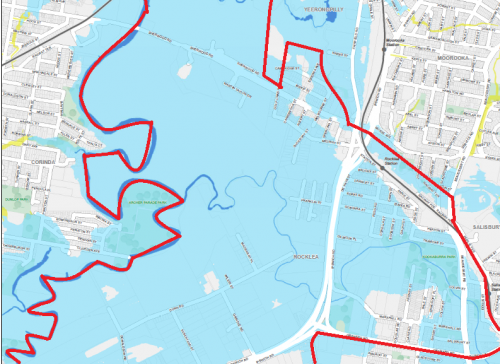 The above image shows the outline of Rocklea and the extent of Q100 flooding through the suburb.

We believe in assessing risk versus reward to suit your own circumstances. Investigate Property is very risk averse, meaning we will do everything we can to avoid known risks. Every form of investing involves some level of risk, however, it isn't necessary to buy known flood prone property to make money. This is a high risk strategy. Yes, it could achieve very good growth over the next 10 years, but it has the very real potential of having very limited growth if there is another flood (or more).

There are plenty of deals out there that do not require this level of risk. Speak to Investigate Property about making risk adverse property investment decisions. Visit www.investigateproperty.com.au/membership-options/ to find out more.