The ‘Funky Flats’ is a property purchased earlier this year by an Investigate Property client. We say ‘Funky’, but the reality is that this is the nicest thing we can say about it without overstating the property... put simply, they are ugly! 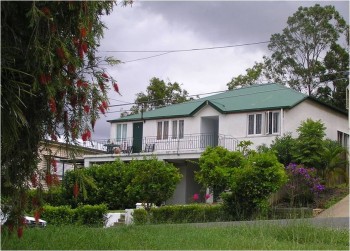 These flats are ugly! Even a professional photographer, utilising all the tricks of the trade like complimentary angle and a soft foreground can't hide that fact!

But appearance only counts for a little as the numbers speak a lot. Also, the ugly appearance is likely to help generate great profits!

A lot of renovators dream of a house full of character: ornate ceilings, wide breezy verandahs, beautiful timber floors, large kitchen areas and potential for great street appeal. Unfortunately this property lucked out in all those departments. In an earlier life, many, many years ago, this would have been a large and graceful Queenslander, but not anymore. It is now four flats, somewhat randomly pieced together and done so by an Italian family with an appetite for concrete. The external walls are now concrete. The internal walls of the lower level are now concrete. The bathrooms and laundries now have concrete floors. There is a deck at the back made entirely of concrete, balustrade included. Possibly the worst part is the concrete deck at the front that is an extension rather than a typical under roof verandah. It stands out like a sore thumb. About the only character elements are the corrugated iron roof, which doesn’t quite fit with the rest of the dwelling now that the rest has been changed, and one wall of VJ in one of the upstairs flats. But this is all good news as the value is in the land, the land is zoned for units and has Demolition Control, and we are keen for any argument to persuade council to allow it to be knocked down in the future.

Let's look at the logic behind this purchase.

As stated, the property is zoned for units. It also consists of two lots totalling 809m2. Based on the Government assessed land value of the neighbouring properties that are 405m2 (which is always low), each block here is worth about $480k+, so a total of $960k or more.

Our client paid $923k. So they paid less than land value, but this alone isn’t enough to warrant purchase, though it is a big step in the right direction. We received advice from a town planner during a conditional contract period that the chances of demolition were very high. Obviously there is risk that it won’t be possible so the property still needs to stack in other ways.

The next reason why we liked this property was the location. It is located in an upmarket and high growth suburb only 4.5km’s from Brisbane’s CBD and 400m to a train station. Predicted growth from Residex at the time of purchase was 9%pa for the next 3 years and the suburb had consistently shown 11%+ growth per year. What better time to have growth like this than when you are buying below land value! There is one better time... when rents are also increasing significantly and you are buying a block of flats!

Another reason why we purchased this property was it had value add potential. Externally not a lot could be done, but there are a few things. In a way it is best left ugly as we don’t want to give council any reason to refuse an application for demolition. One of the best things with this block is it is solid and quiet internally thanks to the abundant use of concrete. All of the flats are in very dated condition and there were a lot of shabby curtains and dark wall colours. Light, neutral paint colours and some slimline PVC venetians (under $15 each from Spotlight) instantly made each flat feel about twice the size it was. Ikea flat pack kitchens were also an economical solution as the kitchens were only small. The tiles received a coat of tile paint and had an upmarket trim placed around the top. Lastly, the bulky, dated furniture was replaced with more stylish, smaller items that again made the flats feel larger. 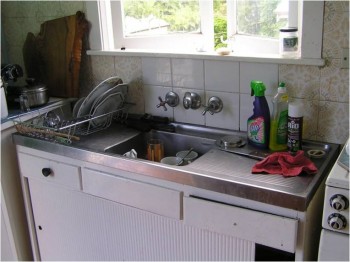 Before - The old kichen in one of the flats. 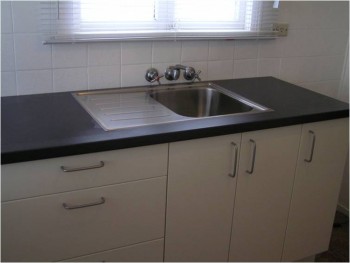 After - Note the taps are the same. Keeping the plumbing where it is saves $$$. 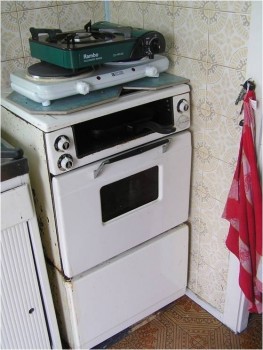 Before - See the patterned tiles? 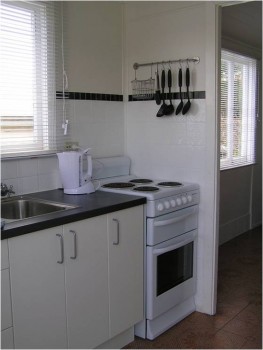 After - Same tiles painted white with tile paint and new decorative trim around the top! 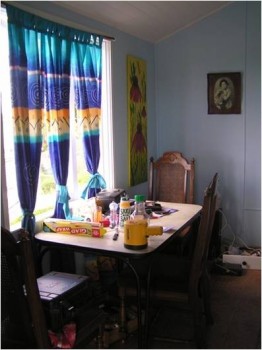 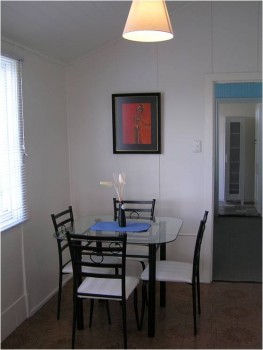 After - Slimline blinds, light colours and smaller furniture makes a huge difference! Another good tip is to use glass tables in small areas as this can also make a room feel larger.

The flats were very under-rented at the time of purchase, but the simple renovations and an increase in rents in line with the market saw an increase from $760pw rent to $1000pw rent... and one of the flats is yet to be touched. One of the flats alone went from $140pw to $250pw... that is a 64% increase!

Here are some of the numbers for you:

It isn't all just about yield!

The yield might not appear to be that great, but keep in mind that:

1.    The property was purchased below land value so there is still a good development option down the track

All these factors combined make for a fantastic buy!

There are some lessons to be learnt here. This property had actually been on the market for a while at a far higher price, which we were able to determine using our resources. This enabled us to negotiate hard and is actually a strategy we use a lot: concentrate on ‘cold listings’. We actually had a few clients glance at this property before the current client purchased it, but they could not get over the ‘ugly’. I admit, the property isn’t for everyone, but the client that did buy it did the sensible thing and went in with numbers and not with heart. They also said, ‘what does it matter if they aren’t overly attractive? The quiet street and proximity to the railway and CBD will keep it rented and I am interested in the land anyway, anything else is a bonus’. We like this attitude as it shows a great level of ‘investing maturity’.

You can also have the opportunity to see the Funky Flats for yourself on the Reno Kings On the Buses Workshop which takes you live around the streets of Brisbane.  For more information click here.

Get on the band wagon!

This is just one of a large number of properties that Investigate Property has sourced this year. As well as being able to purchase these properties, Investigate Property members also have access to our town planner/buyer’s agent to ask questions about properties that they locate plus they receive Premium Content news articles AND they hear about every property we source over the course of 12 months, not just a few properties over a short time frame. This is highly valuable for those wanting to educate themselves further on property in Brisbane before buying.