This is a two part article. The first part discusses why we should all become DIY inspectors and where and how to look for termites. Part two, to be published in the next newsletter, looks more closely at what it is you are looking for.

Every investor or home buyer should learn to look for signs of termites when inspecting a property. Too many people dismiss this activity in favour of employing the experts, but there are times where it just wasn’t necessary to get as far as that  – the termites were there, they were obvious, you aren’t interested in buying a property with termites and yet you have just wasted a lot of time and money by not knowing the basics. We aren’t advocating the replacement of the experts: regardless of whether you find any evidence of termites you should always have an expert carry out a thorough pest and building inspection. What we are trying to do is get you to be smarter with your time and money by only getting as far as the experts on properties that pass your initial inspection. After all, why get them out to tell you something that you really should have known already?

I am not a licensed building or pest inspector, which makes it all the more relevant. I am someone who buys property for people for a living as a buyer’s agent and as such has a duty to minimise costs in both time and money for my clients, hence the need to take a thorough look for pests when making an inspection. My time is also valuable, so I am not interested in pursuing a property that is likely to fail the building and pest inspection, unless of course that is part of the strategy!

Termites are a part of life - don't run away at the first sign of them!

The first thing we must do is accept that termites do exist and exist in vast quantities right round Australia, although Tasmania and parts of Melbourne experience very low levels, as can be seen by the CSIRO’s ‘Termite Hazard Map’. 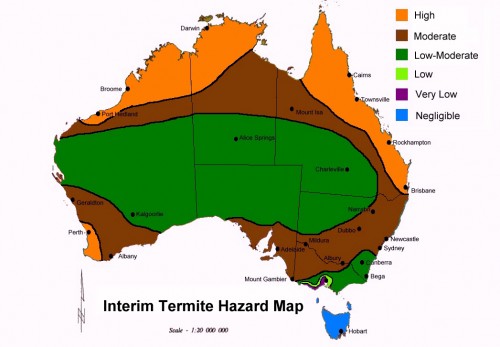 Termites don't care if you have a brick house!

The other thing you must be aware of is that termites can attack any dwelling type. Being a Brisbane based buyer’s agent I look at many timber dwellings and one misconception I hear all the time is that weatherboard homes (i.e. the ‘Queenslander’) are at high risk from termite attack. This isn’t quite accurate. Yes they are at risk, but so is every other house. One big difference with a Queenslander style home is the majority are highset, so you can monitor termite activity and penetration into the dwelling. This is far more difficult to achieve in a brick and tile slab on ground house. Termites only need the smallest of cracks in the slab to enter the dwelling and the big problem here is they are concealed, so the first a lot of people know about them is when they have done significant damage. Even houses with termite barriers are at risk if treatment and inspections are not kept up or the barrier is somehow breached. It may be breached by plumbing or electrical works/installation, or by the build up of a garden bed against a house, or a moisture issue, or most common, man’s ability to provide a highway into the house by stacking timber against a dwelling. Modern houses are also largely pine framed, whereas older dwellings have far more hardwood, which while also susceptible to attack is far less attractive to a termite. It is like us being presented with a BBQ eye fillet steak compared with a fatty, BBQ casserole steak. A perfect example is when you do find a Queenslander that has been infested, the majority of damage is to more recent pine additions such as built in robes and cover strips.

When I inspect a property I seek out current or past termite activity as well as areas of dwellings susceptible to termite entry.

Here are some hints and tips of how and where to look:

Next issue we look at what you are looking for with some real life examples that were picked up by Investigate Property before a building and pest inspection was carried out.

Investigate Property are buyer's agents of Investment Property in Brisbane. To find out more on how we can help to locate your next deal click here.